skip to main | skip to sidebar

This trio of Saadet Türköz - voice/lyrics, Nick Fells - laptop and Neil Davidson - acoustic guitar was recorded live at The Old Hairdressers, April 2017. The three pieces amount to a thorough investigation of pattern, layering, process and form;  each gesture conveying its own purpose and fold; physically present and at the same time open to the breadth of the other players
Saadet's voice is from everywhere. "In my improvisations ... I am looking to transform memory. I seek to evoke pictures and atmosphere by means of voice and music which transcend cultural boundaries."

THE FINAL FIVE is an exquisite corpse of free jazz, a vivid science fiction mess of loops and conditionals linking conceptual processes and human flesh. The music bypasses romanticism for an erotics of repetition. Anticipation abounds, awaiting aural perceptions that we don't know about yet, of things underneath, of codes hidden. Again. Trio studio recording from 2014.  Fritz Welch (drums), Armin Sturm (double bass) &  Neil Davidson (guitar). 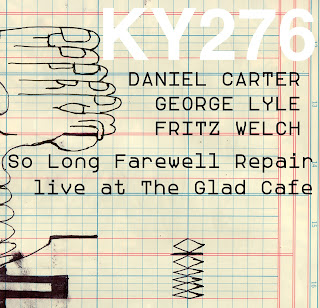 
Just over one hour in length the recording of their set extends sonically and formally in every direction; seething not in a heedless ‘blow-out’ but as though constantly emerging in new environments – insects improvising structures of great depth using familiar materials but in counter intuitive ways. George’s playing is here in all its breadth, too: tactile adjusting and nudging, resonant low field work. From the CD liner notes:

There was a particular way that George’s hands roved for and with the bass; some kind of non-euclidian space being described. Not at all punching the clock of well trodden bass lines (no disrespect there, since he could pad around with gentle care in those shoes too) but rather pointing to (George pointed at nothing-in-particular all the time) and initiating things that were bluffs, blinds, never quite suggesting any harmony or impulse but coaxing a very sideways-shifting but grounded human presence. 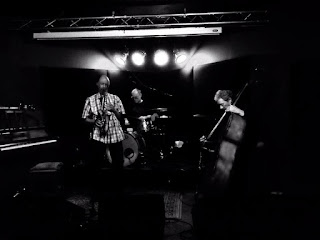 Back story:
Daniel and Fritz have known each other a long time, hovering around the edges of each other’s gigs in NY through the years but rarely playing together.  When Daniel came to Glasgow to perform with William Parker in 2012 they reconnected and set plans in motion to work on a new project. This trio was the outcome.

George and I hit it off crackin’ jokes in the back row of a Glasgow Improvisers Orchestra gig. We talked about jamming together for a coupla years before it finally happened. By then I lived just up the hill and so it soon became a weekly occurrence. We would meet during the day, drink lots of strong coffee and shoot the breeze before playing music in his living room. He was a free players through and through and seemed to thrive on sound!
I was psyched that he was totally comfortable in the ultra weird zones that I like to inhabit. He pushed himself and his instrument to fantastic extremes. George quickly became one of my favourite collaborators. He was always down for playing. And he loved to talk about music, sounds, ideas, dreams, politics and life. He joined me and my family for Christmas dinner a few times and always brought a fresh pineapple to parties.  - FW

Alasdair Campbell, who knows a good thing when he hears it, booked the project for his Counterflows festival without hesitation. We thank him once again for his amazing and ceaseless support for this music.

The concert is presented in its entirety.

All Iorram releases are now available to download via Band Camp.
Posted by Iorram at 07:57 No comments: 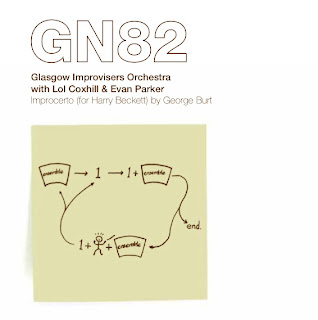 Live recording of the orchestra's performance at the Gateshead Jazz Festival 2011 with guests Lol Coxhill and Evan Parker. From George Burt's notes on the piece:
The origins of this piece go back to one summer when I saw The Barry Guy New Orchestra and Peter Brötzmann’s Chicago Tentet within a few weeks of each other. I was looking for ways that a composer (like Barry Guy) or a bandleader (like Peter Brötzmann) could organise music into a structure without inhibiting the players and promoting co-operation between them. I thought I could see one solution in Barry Guy’s graphic scores. In trying to get to the essence of how these work, I drew little diagrams on scraps of paper. Symbols like a triangle for a trio passage or linked circles for a duo came quite naturally. While I was planning a more complicated piece that would bring out the useful aspects of conduction while keeping the emoting and arm-waving to a decent minimum, we got the news of Harry Beckett’s death. An orchestral piece with space for solos seemed a good way to celebrate his life and music, because one of the characteristics of his playing was his ability play lines which floated cheerfully over the broiling chaos of a big free-jazz improvising group. That’s the origin of the Improcerto. Evan Parker and Lol Coxhill, Harry’s old muckers, play the first two solos followed by Neil Davidson, Raymond MacDonald and John Burgess. Conducted sections are by George Burt, Raymond MacDonald, Una MacGlone, George Burt again and Peter Nicholson. George Burt, 2011
Posted by Iorram at 12:20 No comments: 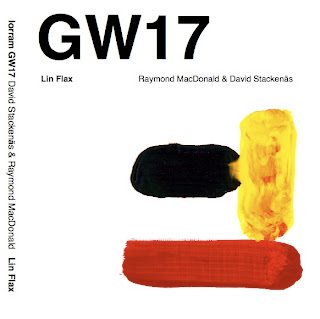 David Stackenäs is widely regarded as one of Swedenʼs most enquiring, adventurous and distinctive guitarists. This record documents his first project with Scottish saxophonist Raymond MacDonald. The duo creates highly textured and intimate soundscapes, at times strongly melodic, with a dark lopsided narrative. 'Lin' translated from Swedish means 'flax' and 'flax' in Swedish means 'luck'. While luck may have played a part when Stackenäs and MacDonald first met in January 2009 in the Glenn Miller Café in Stockholm, the rapport that developed on their first duo tour, culminating in this recording, is born out of a mutual relish of the spontaneous collaborative encounter. Both players embrace the way that these encounters can lead to new insights and artistic developments and this recording showcases these vital elements.

Iorram is a record label based in Glasgow releasing small editions of experimental and improvised music.